You know how when people talk about the X-Men movies, the general rule is “Two or Three great ones, two miserable ones and a couple in between”? That same logic can be applied to 1992’s X-Men animated series, oddly enough. With 75 episodes spread out across five seasons, X-Men is a kind of glorious mess of a television program. There’s a mix of good, bad and “are you kidding me with this right now?”

The world of X-Men is a 90s Jim Lee-inspired landscape of mutants who all seem to wear costumes for some reason, even if they aren’t affiliated with the X-Men or Magneto. There are good mutants and bad mutants and not a whole lot in between – barring a couple of coming-of-age/learning your mutant power stories set in various “Smalltown, USA.” Wisely, just like the 2000 X-Men film, it is a world of fear and hatred of mutants already in progress. That being said, the first season is by-and-large introducing the X-Men and the viewers to the obstacles that they will be facing for the majority of the series’ run. X-Men is also a show that likes to remind its viewers that Jubilee is gonna be in this show and there’s not a damn thing you can do to change that. “She shoots fireworks! Kids LOVE fireworks!” (Ok, Jubilee’s not THAT bad.)

Let’s start off with the pros of this particular X-Men incarnation, shall we? First off, unlike the X-Men films, it was unashamed to dive head-first into X-Men lore. Though they were among some of the sillier episodes, the series highlighted The Savage Land – the prehistoric continent that had dinosaurs, goofy mythological religions and cave men vs. pterodactyl men. It had the Shi’ar – the cosmic bird-like race with radical hair-dos that looked like sideways Mohawks. And once you throw the Shi’ar into the mix you have to have The Phoenix Saga – the classic Chris Claremont tale that made the otherwise bore of a character Jean Grey into a galactic powerhouse. To date, X-Men’s Phoenix Saga is as close as any onscreen iteration has come to that original storyline. Also Wolverine has one-liners. Boy oh boy does Wolverine have one-liners.

You just couldn’t do it right, could you Bret Ratner?

Another thing that X-Men got right is the voice work. In recent years, voice actor Steven Blum has done scores of Wolverine voice-acting roles, but for my money, Cathal J. Dodd IS Weapon X. Magneto’s voice has a cadence that echoes with power, as does Apocalypse’s booming unearthly speech and Mr. Sinister’s hollow, metallic tone. Beast’s Shakespearian soliloquies also translate very well from page to screen. On the more obnoxious end however we have Professor X, whose screams of psychic pain seem to increase as the series progresses and Juggernaut, who’s just too stupid to be real (fake.) They are half-brothers after all…

Now let’s get to the uglier aspects of the series…which are myriad. Though Apocalypse, Magneto and Mr. Sinister are all villains portrayed with bravado and zeal they are pretty hammy incarnations with small scope ambitions. Wolverine’s past is something comic books LOVE to flesh out, and rarely is it executed gracefully; the animated series is no exception to this universal truth. Logan is the perpetual grumpy “I’m gonna slice your face off” anti-hero, but if the personal past depicted in the series is to be taken at face value, he would probably be a little less broody and maybe just irritated every now and then. Also I can’t tell you how many times that Cyclops’ badass son from the future appeared and I was begging for them to address their relationship…they never did.

Early on in the series it’s pretty clear that the creators of the show don’t necessarily know what they are doing. There are a bunch of head-scratching moments where it’s pretty safe to assume the writers are just making shit up. In an episode where Cyclops is kidnapped by the sewer-dwelling Morlocks, he says: “Sunlight fuels my power; I won’t be much good to you down here.” —wait, what?? Magneto’s first attack is ultimately stopped by Xavier telepathically attacking him while the Master of Magnetism’s helmet is STILL ON. That’s rudimentary X-Men science right there folks: Magneto helmet = no mind hacking. That never really made sense, I know, but that’s the rule dammit! My favorite WTF moment of the series is in a Season 5 episode (that was supposed to be in the middle of Season 3) “No Mutant Is an Island;” It’s a Cyclops-only episode which means it will automatically be terrible. Cyclops returns to the orphanage where he grew up, has a creepy romantic thing with the woman that raised him and stumbles upon an Oliver Twistian-perverter-of-orphans (Purple Man) who uses them for their mutant powers. He instructs a mutant child in a wheelchair (Tacky) how to break into a bank with the following: “You, Tacky – we’ll use your wheelchair transformation power to gain access.” The young lad’s wheelchair then morphs into…a tank…HUH? 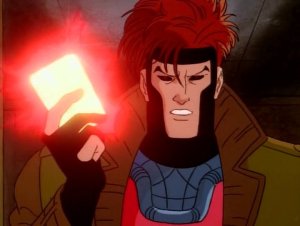 Everybody remembers Gambit being super awesome, but honestly he sounds kind of…special

Epic and dramatic, silly and farcical, X-Men is a piece of 90s nostalgia that probably wouldn’t be made in the same fashion in 2014. It broached the subjects of racism and intolerance with its mutant allegory and even brushed up against the notion of God and religion in an excellent portrayal of everyone’s favorite teleporter, Nightcrawler. Most of the characterizations were spot-on actually. X-Men suffered from curious episode production problems and the animation style mutated from grungy Jim Lee anime to production line Bible Adventure cartoony. The show often seemed aware of its shortcomings though, as it constantly took the character of Morph on and off the table – Professor X often told Morph he “wasn’t ready to be back on the team.” (Morph was pretty much Jar Jar Binks before Jar Jar Binks was a thing.) X-Men started off flat, rose to entertaining heights with The Phoenix Saga and other multi-arc storylines, and plateaued back to where it started quality-wise, ending with the whimpering series finale: “Graduation Day.” I rewatched most of it, skipping solo character episodes about Gambit’s weird swamp cult and Storm’s exhausting claustrophobia, but for some reason I watched those godforsaken Cyclops episodes in their entirety. I rewatched them so you don’t have to. If you do want to venture back into the 90s X-Men cartoon, go for episodes with Apocalypse, Nightcrawler, Magneto and Phoenix. Skip the last season man. Just skip it.

Watch it? …If you REAALLY miss the 90s and/or LOVE X-Men